The following selection of photos been have taken during Probus tours, outings and special occasions from 2017 Onwards.

*** click on each photo if you wish to see a much larger image.

The most recent photos immediately below, were taken at the Probus club’s first outing for 2020. A trip on the Puffing billy railway on Monday the 2nd of March.

Kath Thompson, the incoming President for 2020/ 2021, being congratulated and handed the chain of office by outgoing President Harish Shah, at the 2020 AGM held on March 4th 2020

Photos taken earlier, in the year 2019 and prior years. see below

The last outing for 2019 was the clubs Christmas lunch at the RACV Healsville Country Club. A total of 72 members attended the lunch and 2 of of the 9 tables involved in the lunch are shown in close up below, with some of the other tables in the background.

Probus members assembled on the station platform and then onto the into a Puffing Billy train carriage to make the return trip to Belgrave .

Members participating in a visit to the Ambulance Museum of Victoria in Nov. 2017

February 2018. Colin Sando was presented with his OBE by the golfing group, after reaching 80 years of age.

March 2018. Our Club outing was by Ferry to Portarlington.

Probus members at Bright during the 2018 car safari

Members enjoying what looks like an “alcohol free” lunch?  “was it at “The pub with no beer” noo! it was during an outing to Portarlington, waiting for lunch to be served.

A photo of some of the aircraft on display. taken when the club enjoyed a visit to  the Point Cook air museum [/one-half-first]

Members gathered together at the 2019 Chrismas in July luncheon 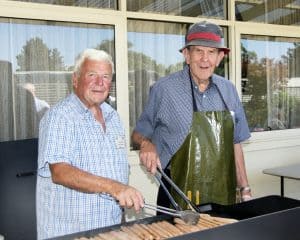 NASA has put their entire collection of images, sounds, and videos of galaxies, planets and space missions online, publicly accessible and copyright free for anyone to view or use.

NASA has over 140,000 images, sounds, and video in their media library, now available for viewing or download, copyright free. You can choose to see images, videos and audio (or all three) when browsing the gallery, narrow a search by year, and sort by newest uploads or most popular.

All the content in the NASA media library is free with no copyright restrictions for non-commercial use:
“NASA content – images, audio, video, and computer files used in the rendition of 3-dimensional models, such as texture maps and polygon data in any format – generally are not copyrighted. You may use this material for educational or informational purposes, including photo collections, textbooks, public exhibits, computer graphical simulations and Internet Web pages. This general permission extends to personal Web pages.”